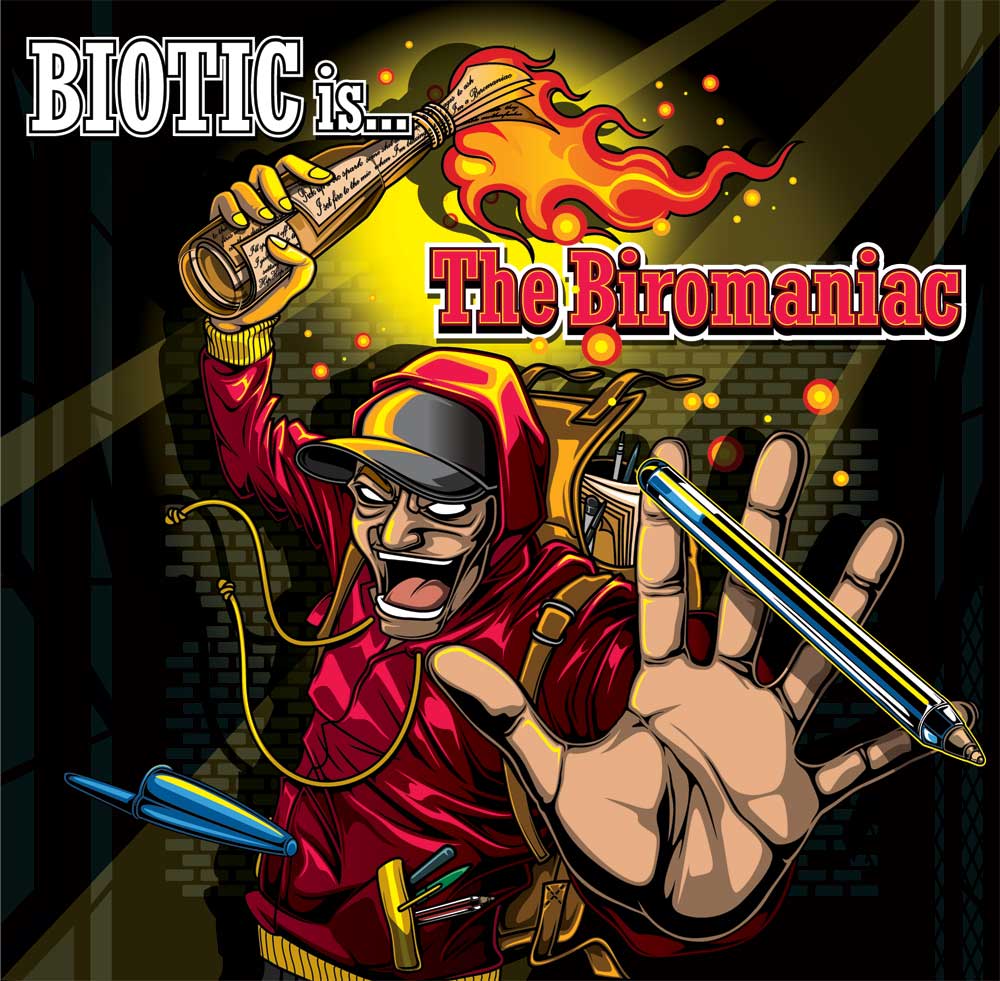 Once again it’s Biotic blowing incendiary lyrics engulfing mountains in flames
like in a blaze on his new album!

All fire-breathing over high-octane beat drops, the BrisBang MC returns to the bonfire blowing
stacks to turn it out again on forthcoming album THE BIROMANIAC. Not unlike Biotic’s
previous releases, over 15 tracks, he wields the biro where otherwise only therapy could cure.
Biotic’s rhymeslanging stays amped throughout letting loose with the Bic as it bleeds the page.

THE BIROMANIAC is available NOW through vcclothing.com and
ozhiphopshop.com and through select stores throughout Australia.

“I’ve put loads of effort into this release and I feel that will translate well to the listener. Every bar
and punchline has been carefully thought out and I’ve taken my time trying to polish each track
to its potential, while also trying not to polish out the grit.”

The late summer single & Drunk On A Sunday, released prior to this album’s drop, does what
only a day off could and gets a backyard lit up. The Sunday anthem bangs out with a splash in
the kiddies pool. From slurping a shoey to blazing haystacks in the AM, this is the track you play
loud on your last day off of the week. It lies in contrast to the razor-cut slap of sobriety to the
new album.

Letting the ink splatter, the rapper spares rare air in tracks pitting the likes of New York emcees:
Sean Strange (‘The Underground’) and Diabolic (‘We Gon Do It Like That’) alongside their
west coast counterpart in Jahred of Hed P.E. (‘Our Way‘) against the scene’s domestic
frontline: Bigfoot and Dwizofoz (‘Step back’), Pleura and Elaborate (‘Lyrical Combat’).
Biromaniac’s lyrical push is outpaced only by the pulsing rock-riffs racked up from a gang of
beatsmiths to fuel the fire including Level 13, Contagious, Mizari, Insideus, Nuggy Gee, C-
Lance and Rob Shaker. Cuts on the album were scratched by DJ Backlash, DJ AJS, tracks
mixed by Tristan Pearson (Clockwork Records) and mastered by Rob Shaker (Syllabolix).

“The Biromaniac& will take the listener on a trip into the workings of my mind, and explain what
its like to be a rapper and the things you have to deal with on the regular when trying to create
fire tracks.”

His message in a bottle comes with a rag flaming out of it in mid flight aiming
straight for your front window.