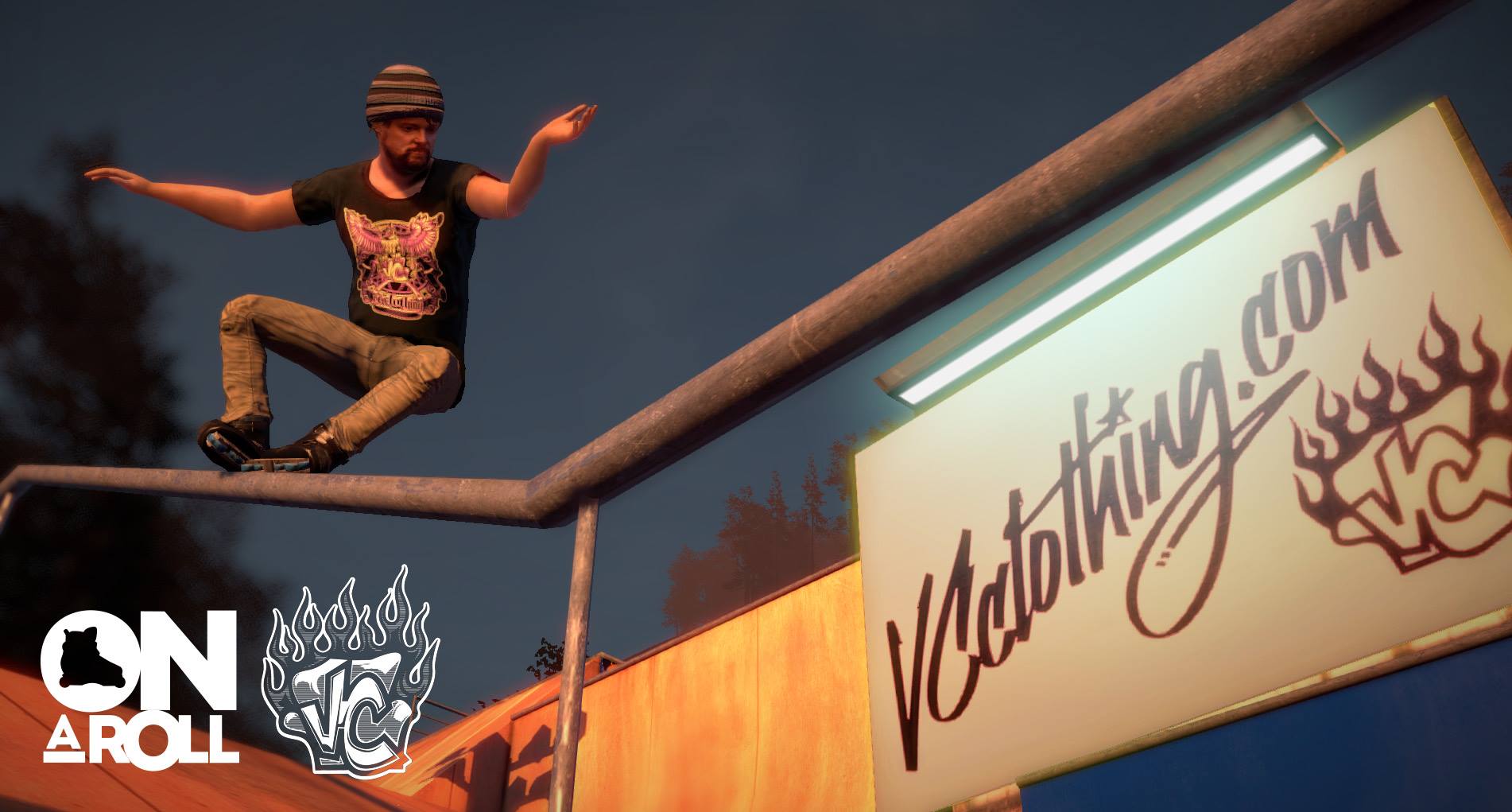 We are proud sponsors and very excited about the new rollerblading video game ” On A Roll” coming to PS4, XBOX One, PC ,PS3, XBOX360.

So we had a talk with Jelle Van den Audenaeren, The creator of On A Roll to see how the game development is coming along and what we can expect on the release day. And also the latest Project update video based on the Winter Clash skatepark! Its so dope!

So Jelle tell us how On a roll all started
I have been dreaming about a rollerblading game ever since I got into it in 1997, a game where you could do any trick you could think of and not be restricted by whether you actually had the guts to try it. But back then I just thought it would be too complex for the current generation of gaming platforms. Then Tony Hawk’s Pro Skater came out. I didn’t own a Playstation at the time, but I remember playing this game for hours at my friend’s house. I would play the game imagining the character on rollerblades and I would find tricks that would resemble rollerblading tricks as close as possible – not that skateboarding isn’t awesome already, it’s just that I was obsessed with rollerblading.
3 or 4 years and another Playstation generation later, Rage Software had actually built the game I had been dreaming of for so long: Rolling. A rollerblading game where you could do any trick you want and you could even play as some of your favorite pro skaters. I played the hell out of that game and I still do from time to time. But 12 years have passed since then and technology has grown exponentially along with an increasing creativity in the rollerblading sport.
So just for fun I decided to build my own rollerblading game with graphics that hold up to the current standard and ultimately with a flow and trick vocabulary that resemble modern day skating. With professional game engines becoming more easily accessible I started tinkering again just like in those early days, with one small but important difference… During the past 10 years I had been lucky enough to be working full-time on several feature length 3D films, a job requiring the skills and knowledge of the software packages which are used not only in the movie industry, but also in the game industry. So I kinda already spoke the language, now it was just a matter of bringing my childhood dream to life! 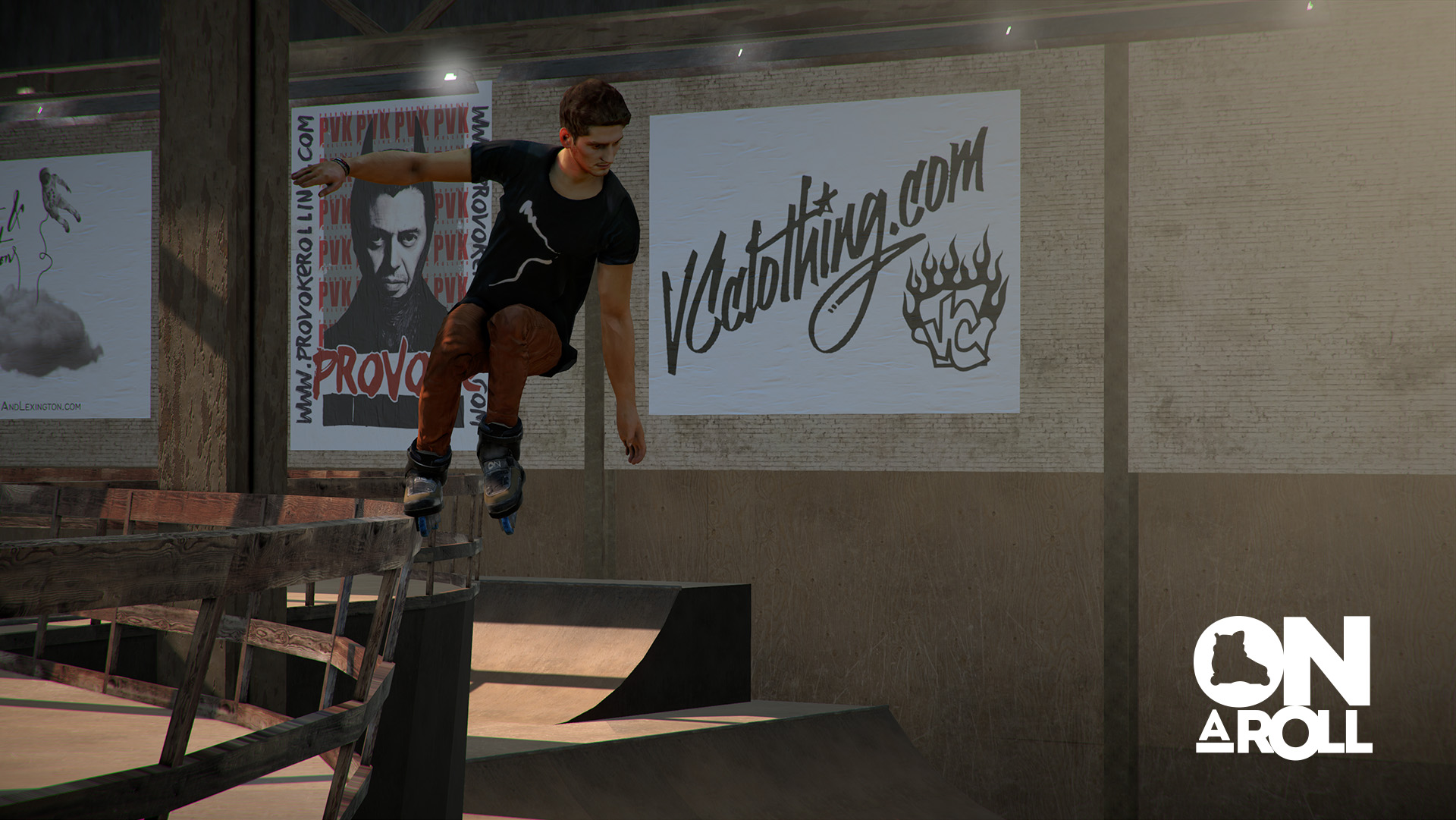 What was your experience with the Kickstarter fundraiser for the game?
The months before, during and after the Kickstarter were very intense. The preparations took a lot of time and once the campaign was launched, I was working almost 24/7: promoting the Kickstarter, doing interviews, contacting media, answering questions from backers and sponsors and so on. It was fun, but also kind of stressful. Plus, my wife had just given birth to our second child so I had my hands more than full. But the feeling I got when I reached my funding goal was indescribable. So many people who believed in On A Roll, that’s just amazing!

I know a lot of people are excited about this game! How far has the game developed since the Kickstarter?
We have done several motion capture sessions and 3D scans of pro skaters. New environments have been developed and we did a lot of programming and behind-the-scenes improvements. By the end of April we will reach the Alpha Stage so it’s coming along quite nicely.

How many hours have you yourself put into developing the game?
Hours wouldn’t come close to covering it, hehe. I worked on the game for a couple of years before I launched the Kickstarter. Weekends, evenings, nights, holidays… In total I guess it would accumulate to about 3 years fulltime. Luckily I have a very supportive wife. Now that is dedication!  So who is the team now behind on a roll making this dream a reality?
At the moment we are a two-man-show and we also work with a couple of freelancers for other tasks. But the main project is now done by me and our amazing programmer. We work really hard, but we love what we do, so that’s all you need, right?

That is exactly right. What was for you the hardest part during developing of the game so far?
Juggling my core work (developing the game) with all the other stuff like support, answering hundreds of emails per day, marketing, interviews, legal stuff and so on.

Which pro skaters can we expect to see in the game? What style of skaters/skating did you capture for the game?
So far, we have motion captured Richie Eisler, Dustin Werbeski, Stéphanie Richer, Anthony Finocchiaro, Anthony Pottier, Manon Derrien and Francis Ali. There will also be two people (one guy and one girl) who backed through Kickstarter to have their avatar in the game. They both came to Belgium for a 3D-scan, which was pretty awesome! 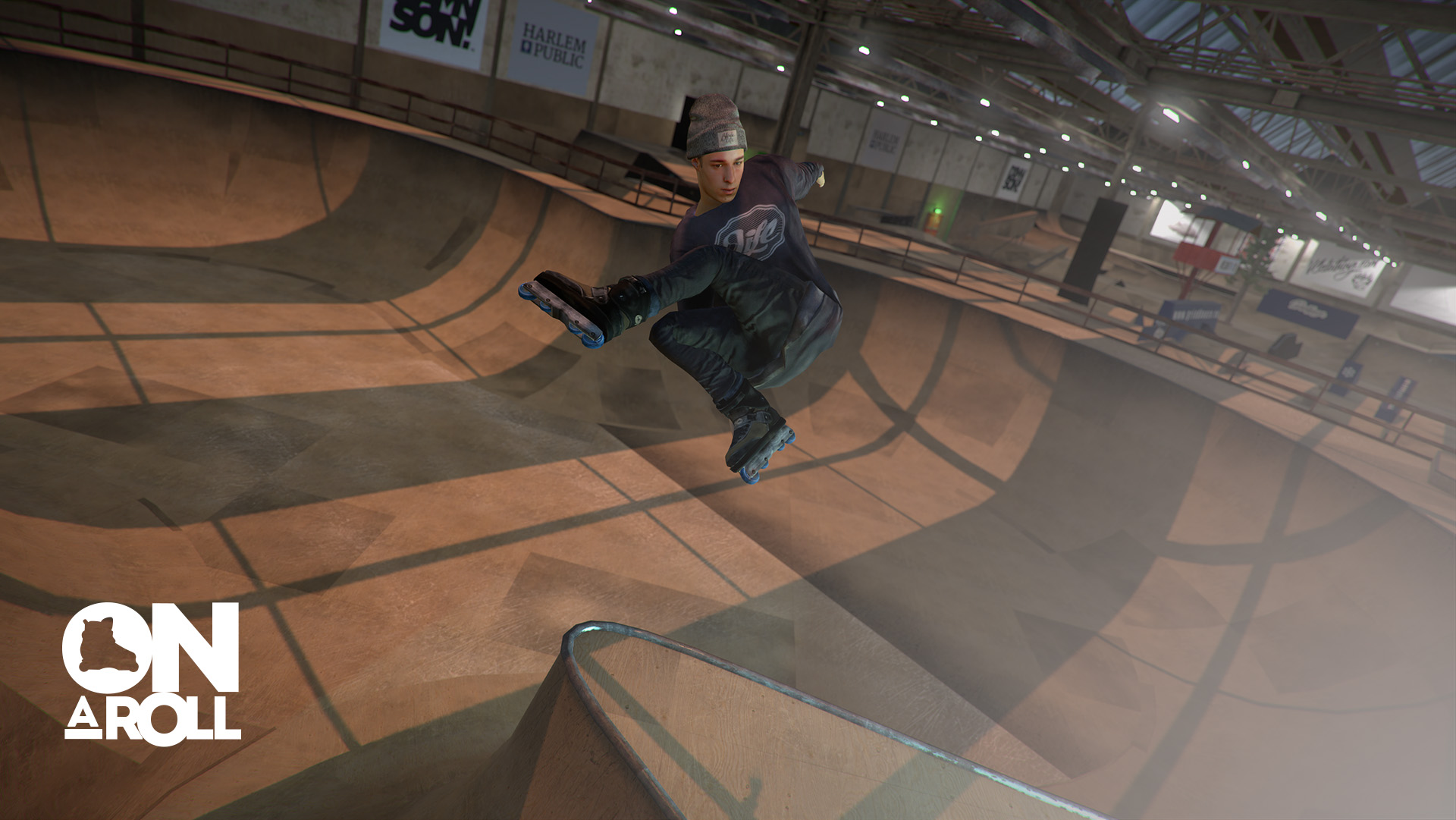 Are you able to play as fictional characters?
Yes, you will be able to create your own avatar.

Is there going to be any special levels in the game that skaters will recognize?
The Winterclash park is included in the game, as well as a high school in California. Other spots are fictional or will have influences from existing places.

Do you think that this game will be interesting for people who don’t know about rollerblading?
For sure! On A Roll is also great for people interested in other extreme sports and sport simulation games and there are plenty of those.

Which other companies have helped support the game?
4Sqair, BladeLife, DamnSon!, Harlem Public, ProVoke, Stockham Media, First and Lexington and of course VC Clothing! I’m sorry if I forget to mention anyone here, but all sponsors will definitely be in the game.

So the final answer on the “savanna or AO unity” debate?
Savanna What do you think will be the highlight of the game?
The fact that you can explore an open world where you have the freedom to do all the tricks and grinds that you like. And also the fact that you can step into the shoes (or better: rollerblades) of pro skaters. We have also put a lot of detail into the lighting and atmosphere of the game.

Is there going to be online multiplayer (or will it be a multiplayer only game similar to THPS5)? Will there be a Crew option (similar to clan tags) so you can crew up with your homies & rep your crew?
We want to have an online multiplayer, but our main priority is the quality of the game. So it will depend on how much time we have.

Yeah for sure game quality is a priority .Will there be DLC content ie new maps, clothing, skates etc?
Yes, there will be DLC content.

Is there going to be a story line in the game?

The question everyone wants to know is the release date?
The game would normally be released in September 2016, but we got a bit of extra funding via the Flemish Audiovisual Fund which means we have extra time to make the game as great as we can. So we might push the release a couple of months, but it will definitely be worth the wait.

Thanks for your time Jelle ! We are eagerly waiting for this game to drop :)